The Training of the Press Council for ISFIT students: Fight Against Hoax Through Fact-Checking

Home > News > The Training of the Press Council for ISFIT students: Fight Against Hoax Through Fact-Checking 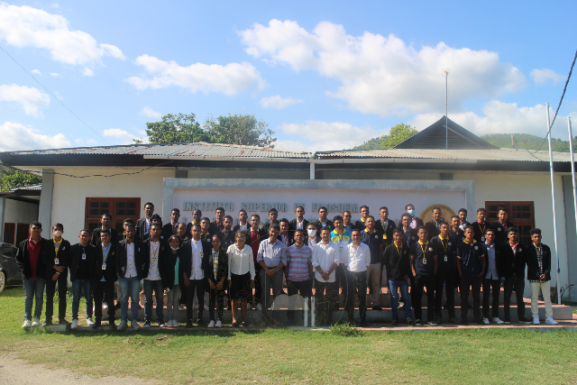 The Training of the Press Council for ISFIT students: Fight Against Hoax Through Fact-Checking

DILI – ISFIT wrote one more story in its academic itinerary, through the training that given by the press council team. The training carried out on the fake-checking topic introduced by the executive director of the press council Mr. Rigoberto Monteiro. Followed by his entourage, made up of Mr. Alberico da Costa as media analysis and development director, Mr. Armindo de Jesus as the IT advisor; besides may there were 50 students from Instituto Superior de Filosofia e de Teologia de Dom Jaime Garcia Goulart-Fatumeta (ISFIT) participated in this training with the 3rd vice-rector, Mr. Elídio Augusto Guterres, at the ISFIT hall, Monday, February 28, 2022.

“The press council has two important roles which are, first to promote freedom of expression, and second freedom of the press, in our current society. We do not deny that we find a lot of misinformation, that is as a big problem that we need to solve. We are in a culture where everyone has the right to post their idea in the media, so we have to adapt this culture of digitization but we also have a duty to fight against misinformation or hoax in our communication on social media, and we are suppose to create a healthy communication”, said the press council’s executive director Mr. Rigoberto on his introduction speech.

He said that, they are so grateful opportunity that ISFIT has, through the 3rd vice-rector invites them to provideS this training, he adds that this is a good opportunity that students should take advantage of, to explore the theories and practices of this training. Because our contemporary reality requires us to adapt the technological change, and students are the first protagonist to use social media daily, to maintain a healthy communication without misinformation and misuse, we need these types of training.

On the other side, the short introduction speech by 3rd vice-rector, Mr. Elídio states that “time allows us to evolve, through the ancient era to the contemporary, where the technological world presents an evolution from 1.0 to our time which is 4.0; the connection evolving from 1G to 4G (preparing for 5G), so we need to do and carry out fact-checking in our adaptation to the technological world, so that we can destroy the misinformation, fake news (hoax) and live with the truth”.

Students were active in this training given by trainers Mr. Alberico da Costa, Mr. Armindo de Jesus and Mrs. Maria Bibel; The director of media analysis and development deepened his training with the theme “guide of use the social media to the public and journalism”, Furthermore, the IT advisor presented with the theme of “Basic Online Fact-Checking & Verification”. The trainers formulated the trainings in the context of how the internet penetrates contemporary society, how to distinguish digital natives from digital immigrants, how to differentiate traditional media from online media, and what are the programs or policies against fake news: And the last, the students also practiced how to verify the news, photos and videos that are fake or edited and looking for a better way to solve the fake news problems as well.

Through ISFIT media interviewed with Mr. Alberico, he underlined that, the team already carried out training for other higher institutions such as UNPAZ, ETCI, UNDIL, IPB, and others; with the objective of sensitizing young people, especially the students to participate in the fight against hoax, misinformation or fake news; and the most important thing is to check and to distinguish what is false from what is true.